Stitching continues.  I’m almost finished with the outlining and a couple of leaves are done.  Plaited braid is moving around the curve.  Cornflower is started.  Progress being made.

Work continues on the sweetbag.  It’s slow going but bit by bit things are filling in.

One thing that I will remember next time:  It’s a lot easier to do the outlining in black thread if the design on the linen is in a different color.  So better to use a sepia colored pen or a grey pen or something.  Stitching black on a black line is just confusing.

I also put the first little bit of plaited braid on the sweetbag, and it might have been easier to do that before the outline.  The plaited braid was a little nerve wracking and following the curve is a little awkward.  Hopefully I’ll get better with more practice.

People sometimes ask me why I’m all over the map on the stitching.  The answer is, I get bored if I do all the outlining first and wait until the very end to do all the background stitching.  So, I tend to alternate between black, color threads and metal threads.  It might not be the best method, but it keeps me from getting bored.

Here’s the sweetbag to date and the first bit of plaited braid. 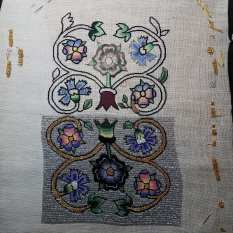 Sometime back in May, I promised I would finish my sweetbag this year.  Of course, I promptly forgot that promise and was off doing a zillion other projects.  The end of the year is awfully close, but there is an arts competition in January that might make a good (but tight) new deadline.  Right now the sweetbag is half-stitched.

I need to finish stitching it, then do all the finishing work, including pulls and cords and tassels.  I don’t know if I can finish all that in less than 2 months, but at least I will have made progress.

I’d like to make the second half a bit more complicated and use plaited braid stitch for the coiled vines.  I took a class back in June with Melinda Sherbring and plaited braid was one of the stitches that was covered.  I thought I had it down at that time, but alas, it kept turning into a hot mess.

So back to basics.  I found a Mary Corbet YouTube video online and studied that for awhile. It’s located here:  https://www.youtube.com/watch?v=1GesMsKhvXo

Then I tried the stitch on plastic needlepoint canvas with a large needle and pearl cotton until it began to make sense. 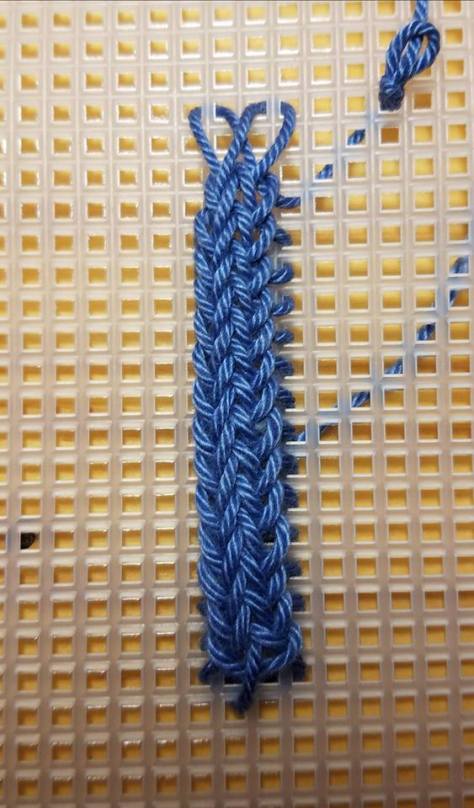 As soon as I started trying it on  my linen with Benton and Johnson gold thread   I had problems.  I went back to the video several times, and kept practicing.  One of the problems I have is I tend to twist my needle which in turn twists the gold thread.  I need to remember to let it untwist after every couple of stitches.  Also, I have to remember not to cut my thread too long.  I think I’ve got it now (at least in theory) and will try it on the sweetbag next.